Hindu culture was traditionally never averse to homosexuality, as evident from ancient sculptures such as those in Khajuraho. It depicts men engaged in sexual activity with each other. The Ardhanarishwara is the androgynous form of Lord Shiva and Parvati. The Kamasutra describes transgender persons as the Tritiya prakriti, or the third sex, thus according them their own gender. Today, they form communities under the identity of Hijras and live together in ghettos, having been rejected from their biological and social connections. How did this change in perception occur? Their presence was considered a breach of public decency by the British during their reign. The draconian Section 377 of the Indian Penal Code introduced in 1860 was frequently used actively persecute and humiliate persons of the LGBT community, deemed unworthy of equal protection. The Telangana Eunuchs Act, 1919 permitted imprisonment of “eunuchs” on sight. The hijra community, among many others, were “habitual criminals” under Criminal Tribes Act, 1871. This gave the police sweeping powers to arrest them, control them, and monitor their movements. There were many other ways of systematically persecuting those who failed to conform to Western ideals of the norm. It is no surprise that centuries of British oppression in India spilled over into post-independence modern India. But what is astonishing is its unrelenting nature, even after nearly 75 years of independence. This article attempts to chart the struggle for queer freedom in independent India.

India’s legal battles for equality of the LGBT community found success after 2001 in the case of Naz Foundation v. Government of NCT of Delhi. In 2009, the Delhi High Court held Section 377 as unconstitutional, and in violation of the fundamental rights of equality, freedom of speech and expression, and even that of life. This judgement was challenged in the Supreme Court in 2013 in the case of Suresh Kumar Koushal v. Naz Foundation. The Court re-criminalized Section 377 of the IPC, as the LGBT community constituted a “minuscule minority”, who did not warrant additional Constitutional protection, and did not have any additional “so-called rights”. This was founded on the fact that there were very few individuals who had been charged under Section 377.

More recently, there have been a spate of judicial developments each of which gradually increase the degree of recognition and rights, than the last. However, progress is slow, and constantly hindered by governmental and legislative inaction. 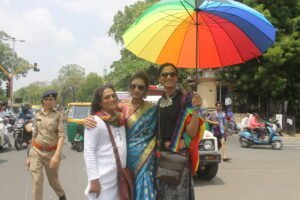 A momentous win for queer rights in India came from the Supreme Court in 2014 in the form of National Legal Services Authority v. Union of India. Without expanding Constitutional rights and protection of all individuals under the LGBT spectrum, the Court unequivocally upheld the third gender as a legal gender identity, by advocating for a psychological test in permitting self-determination of gender without having conducted sex reaffirming surgery. This is a noteworthy deviation from employing a biological test or medical approach, based on binary genders of male and female. The extension of the fundamental right to freedom of speech and expression to transgender individuals meant that they had the right to express themselves, through dress, words, action etc. The right to life is incomplete without a right to life of a good quality and with dignity. The Court recognised this to include gender expression with dignity, as an integral part of personal autonomy and self-expression.

Another stepping stone in the struggle for queer freedom came in the unexpected form of a Constitutional right to privacy. The 2017 case of Justice K.S. Puttaswamy (Retd.) And Another v. Union of India was initially instituted to question the system of Aadhar cards in India. In deciding the validity of Aadhar cards, it upheld the fundamental right to privacy, which is constantly violated for the LGBT community. In a separate section in the judgement, the Court raised multiple challenges to the Suresh Koushal judgement. It recognised sexual orientation as an essential attribute to the right to privacy. Next, it questioned the denial of equal fundamental rights to a certain “miniscule minority” of the population. It recognised the perverse role of Section 377 in allowing a hostile environment for the LGBT community. 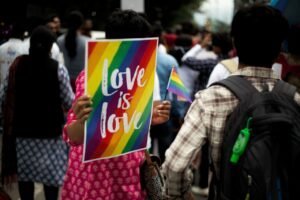 The 2014 NALSA decision and the 2017 Puttaswamy decision together lent considerable momentum to India’s struggle for queer rights. The Constitutional validity of Section 377 was again challenged in the Supreme Court in the 2018 case of Navtej Singh Johar v. Union of India, as violative of the Constitutional rights to privacy, freedom of expression, equality, human dignity, and protection from discrimination. The Court unanimously decriminalised Section 377 of the Indian Penal Code, with respect to sexual activity between all consenting adults. It questioned the basis of deeming certain things as “natural” and “unnatural”. It upheld sexual orientation as an inherent part of self-identity, without which no one could exercise their right to life with dignity. There is no argument in denying fundamental rights to only a “miniscule minority”, which grossly violates the Constitutional right to equality. Section 377 as it stood previously, was unanimously ruled to be violative of the fundamental rights to autonomy, life with dignity, freedom of expression, and equality.

The judgement also contained a safeguard against reversal of laws by any present or future government. To prevent a situation akin to the Suresh Koushal judgement, where the good work done by the Naz Foundation judgement was revoked, the Navtej Johar judgement invoked the legal Doctrine of Progressive Realisation of Rights. The Court stated that once a right is granted, there is no room in a progressive society for any government to take that back.

Judicially, the LGBT community in India had attained freedom and azadi! However, it would be upon the Parliament to draft laws to codify the judgments into meaningful law. In the next, post, we will discuss some of the initiatives taken by governments across India to view the community as equal citizens.

2 thoughts on “QUEER STRUGGLE FOR FREEDOM – Part I”